The city of Kerava offers industrial and commercial lots to companies and zones land to meet business needs. The airport is nearby and the main railway and a motorway pass through the area, providing companies with good traffic connections. All location-related questions are directed to the business service manager, who will find out the companies’ needs. We answer companies’ questions within the next working day. Particular attention is paid to ensuring that companies receives the services they need from a "one stop shop" and that decision-making is quick and flexible.

The city has commercial lots for sale both to the south and to the north of Kerava. The northernmost business area is located in Huhtimo, and the southernmost business area, Kerca, can be found about 4 km from the centre. Lot size can be adjusted according to the needs of the companies, taking into the soil conditions into account. Up-to-date information on available lots can be found in the City of Kerava’s lot portal. The city’s master plan is undergoing a review, and one of the central goals is to find new land for building housing and business premises as well as parks.

In Kerava, every business and every entrepreneur is important. The distances in Central Uusimaa are short, which means that it is easy for the workforce to move between towns. Placing a new company in either Kerava or Central Uusimaa brings a long-term benefit to the entire region in the form of tax revenue, savings on employment costs, new jobs, improved service levels and maintaining the region's competitiveness and vitality. 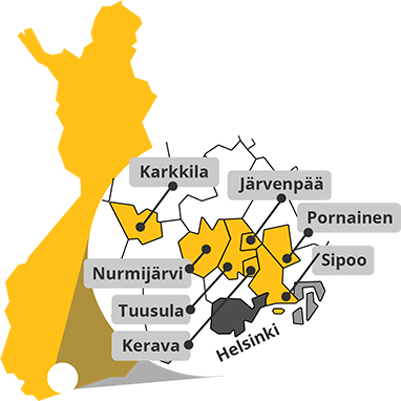